This is another article which was written for the Grantham Target, back in 2015: 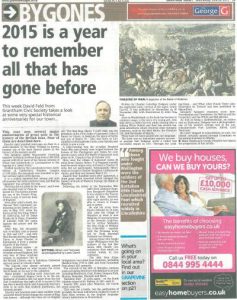 This year sees several major anniversaries of great note in the history of the British Isles. Four of them are described here.

Exactly eight hundred years ago, on 15 June, a water-meadow by the River Thames in Surrey, became one of the most famous places in the history of the western world. The meadow, called Runnymede (‘meeting meadow’ in Saxon) is where King John (1166-1216) agreed with 25 or more of his barons (several of whom had connections to Lincolnshire) to the signing of a ‘peace treaty’. Drafted mostly by the Lincolnshire-born Archbishop of Canterbury, Stephen Langton (c.1150-1228), the document was intended to protect certain rights of the barons. It is a widely believed fact among pub quiz aficionados that John could not read, and that his ‘signature’ was actually his seal.

The king did not abide by the ‘treaty’, and it was also decreed void by Pope Innocent III. The barons invited the son of the French King, Prince Louis, to become king of England. Even after John’s death, the ‘Barons’ War’ continued, culminating in the Battle of Lincoln in May 1217, when the forces of the boy king, Henry III (1207-1272), led by Dame Nicola de la Haye, Constable of Lincoln, held the castle against the prince and the rebels.

After this, the document was re-written and re-issued in 1216 and 1217 – and only then became known as Magna Carta, or Great Charter, to distinguish it from a similar Charter of the Forest.

Some thirteen copies – or exemplifications – were distributed around England, but only four of these originals remain in existence: two in the British Library, one in Salisbury Cathedral and one (now) in Lincoln Castle. The Lincoln copy almost certainly passed through Grantham on what became the Great North Road, on its way to the cathedral.

Many people – including early American settlers – considered Magna Carta to be the embodiment of modern law, but apart from the fact that it enshrines the right of all to access to the law, this is mostly myth, and it generally had very little to do with that modern institution, the common people.

Exactly two hundred years later, another event occurred which would change the course of English history – although this time not on English soil. The then king, Henry V (1387-1422), was the grandson of the First Duke of Lancaster, John of Gaunt (or Ghent, in Belgium, his place of birth) and son of Henry IV – who was born in Lincolnshire at Bolingbroke Castle, near Spilsby, and which is now a ruin.

A long-running war, the so-called Hundred Years War, had already been waged between the houses of the Plantagenet and Valois for over seventy years, when The Battle of Agincourt took place on St. Crispin’s Day, 25 October 1415. Here, near the village of Azincourt (some 36 miles from Calais), Henry V of England roundly beat the much larger army of France’s Charles VI (who did not participate). Subsequently Henry went on to marry Charles’ daughter, Cathérine de Valois, and their son became Henry VI.

Exactly four hundred years after Agincourt, a third great event occurred which changed the history of much of Western Europe: the Battle of Waterloo.

Following his defeat in the Peninsular War (1807-1814), Emperor Napoleon Bonaparte (Napoleon I) was exiled to the Tuscan island of Elba. However, after eight months, he was able to return to France and to power. He and his army were finally defeated on 18 June 1815, near the village of Waterloo in what is now Belgium, by several armies of the Seventh Coalition, led by Arthur Wellesley, the first Duke of Wellington (1769-1852) – together with the Prussian army, led by Field Marshall Gebhard von Blücher.

Among those who fought under Wellington were the soldiers of the 2nd Battalion 69th (South Lincolnshire) Foot which recruited widely in Lincolnshire. The 30th Foot (Cambridgeshire) recruited from Kesteven, including Sleaford from 1779 to 1829, and from Grantham from about 1811 onwards. The roll-call of the 30th at Waterloo contains some surnames which are still familiar to us now, including Blackburn, Cant, Foster, Gregory, Kirk, Muxloe, Ramsden, Stennett and Ward.

Exactly fifty years after Waterloo, our fourth event occurred. This was not a battle, but the publication of probably the most well-known children’s book to have been written in the English language: Alice’s Adventures in Wonderland. Written by Charles Lutwidge Dodgson under the anglicised Latin version of his name, Lewis Carroll. It was published by Macmillan on 26 November 1865, with illustrations by John Tenniel.

Alice in Wonderland, as the book has become in common usage, is the story of a young girl, who falls down a rabbit burrow while chasing after a talking White Rabbit and then has several magical adventures which involved other fantastic creatures, such as the Mad Hatter, the Cheshire Cat, and the Queen of Hearts. These have all since passed into our language.

The book was an immediate popular success – so popular that Dodgson wrote a rather less successful sequel in 1871: Through the Looking-Glass – and What Alice Found There (also illustrated by Tenniel and also published by Macmillan). Similarly fantastic creatures occur here: Tweedledum and Tweedledee, the Walrus and the Carpenter, and the White and Red Queens.

As well as being a mathematician, an author and an illustrator, Dodgson was a photographer: one of his portrait sittings was of the Lincolnshire-born Poet Laureate, Alfred, Lord Tennyson. He never stopped in Lincolnshire as such, but almost certainly passed through Grantham on his several journeys to Whitby.

Many thanks go to Carole Divall for her help in the preparation of this article.