The following was an article which I put together back in 2015, for the unfortunately now-defunct Grantham Target: 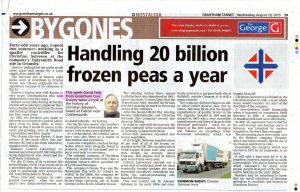 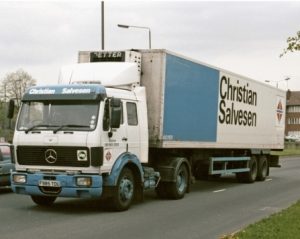 Forty-odd years ago, I spent two summers working as a quality controller for Christian Salvesen at the company’s Ladysmith Road site in Grimsby. I had no inkling that our paths would cross again and merge for a large chunk of my adult life.
The Salvesen site at Easton, eight miles south of Grantham on Ermine Street (B6403), was chosen originally for its operations because of its closeness to the A1 and therefore easy access to rest of the UK road network. Salvesen Easton was well known to very many Granthamians who have worked there over the years. Indeed, at any time during its heyday, some 400 people were employed there. Employees were shepherded to and from the town and outlying villages by coaches which ran four times a day.
In 1983, the decision was made by Salvesen to re-locate its Central Laboratory from its head office in Edinburgh, so that it would be nearer to the main pea-growing area of England: Lincolnshire and East Anglia. The chosen site was Easton. A large section of the main office was partitioned off, and a six-room laboratory complex built within. Clockwise, the rooms were: Microbiology, Preparation, Food Technology/General Office, Chemistry, storeroom and the manager’s office.
Easton’s Central Laboratory remained operational until 2001 when the whole department was closed and the staff made redundant. For the 17 years of its existence, the period during which I was employed as Company Microbiologist, the laboratories serviced 11 processing sites around the UK, from Felixstowe to Dundee. Those sites sent samples by refrigerated transport – often the company’s own distinctively-liveried, articulated vehicles – for testing. Results were usually posted back to the other sites within two days. During the ‘pea season’, the numbers of samples grew substantially and temporary technicians were drafted in.
As a department, Central Laboratory was also there as a centre of information and excellence. Customer complaints, such as foreign bodies which were allegedly found in products, would be examined and comprehensive reports sent back to customers. It was also necessary to troubleshoot on occasion: this could mean investigating anything from mouldy cabbages or carrots in our chill-stores to contaminated meat, ammonia-leak-damaged products and rodents (the site was in the middle of nowhere, after all).
The original company of Christian Frederick Salvesen (1827-1911) was a shipping concern which operated out of Leith, near Edinburgh, and Stavanger. The company’s house flag was the Norwegian flag with its colours inverted. In the 1880s, the company became involved in whaling, with two factory-ships operating out of South Georgia in the South Atlantic Ocean. The whaling station there, named Leith Harbour, was abandoned in 1965 – and it was here, 17 years later, that Argentinean navy invaded the British territory, making its mark by throwing stones at windows of the abandoned buildings.
After World War II, whaling became unfashionable, and Christian Salvesen (the company) moved into deep-sea fishing. In order to cope with the harvest, the largest coldstore in the world was built in Grimsby, at Ladysmith Road. It might be the largest still. From fish, Salvesen expanded into frozen vegetables. This is surprising to many people who, when told, had previously thought that it was just a haulage company.
At its height, Salvesen handled about 80% of all of the frozen vegetables in the UK. This included about 10,000 tonnes of peas each year; since peas weigh, on average, about 0.5grams, this implies that 20 billion peas were frozen every year – or, in the17 years of my tenure, over a third of a trillion! Many of these no doubt found their way onto Grantham dinner-tables, having been supplied to leading food chains.
Central Laboratory carried out a great deal of analytical work for what eventually became perhaps the most successful subsidiary: Dawnfresh Seafoods, the seafood-processing side based at Whitehaven. This was bought out by Alastair Salvesen in the early 1980s and eventually moved to a purpose-built site at Bellshill, outside Glasgow; it is still a going concern. The laboratories also took in work from other companies across the UK, including manufacturers of sandwiches, ice cream, fish, and cooked meats and pâtés.
The company did have fingers in other, albeit rather diverse, pies. For instance, Salvesen Brick was the largest manufacturer of quality bricks in the UK; Aggreko (bought in 1984 and demerged in 1997) was a very successful manufacturer and hirer of large mobile electrical generators – used, for instance in the 2012 London Olympics; and Vikoma, an oil-spillage retention-boom subsidiary which was bought from BP, was – and still is – also very successful.
Christian Salvesen was floated on the UK stock market in 1986, a move which many would consider the start of the downfall of the company; it was certainly the end of what had been a much-loved family concern for many years. It overstretched itself financially when it acquired its competitor, Swift Services in 1993. A company-wide re-branding followed soon afterwards.
In 2007, an aggressive buyout bid for the cold storage and haulage parts of Salvesen was launched by another competitor, Norbert Dentressangle – of which it is now a wholly-owned and completely subsumed subsidiary. The processing parts were taken over by the Belgian company, Pinguin, which has more recently moved out of the Easton and Bourne sites.
Essentially, the company which was started in 1872 by its namesake, is no more. It will take a long time for it to be forgotten, however, especially in south Lincolnshire. The site at Easton is still called ‘Salvesen’s’ by many local people, even when they’re referring to PAS – despite that part of the site having been sold to McCain in the early 1980s!
Readers may be interested to know that my small collection of Salvesen ephemera is available and housed in Grantham library.
David Feld, 2015.07.09